Partnering with others in our community is something we continually look forward to. We currently have our beers available at Grill on the Green, Sip and Bite, Jacobs Grill, The Tasting House, Elixar Bistro, Rich Uncle Tavern, and  Elmira Curling Club. We have also been able to partner with the Elmira Sugar Kings and Lana’s Lounge. Andrew Coppolino writes about the latter in the Waterloo Chronicle on February 4, 2022.

Like all business owners, Shan Bricker and Marissa Mansz of Lana’s Lounge have weathered the slings and arrows that COVID-19 has used to assault the food and beverage industry.

Yet a small tweak to their beverage menu has had paid returns.

“Lana’s Lager,” their proprietary beer, appeared in September 2021. The idea wasn’t new, but the timing was.

“Its birth was much earlier, but the issue was finding the right marriage between a brewer and us. We didn’t just want a re-flavouring of an existing beer,” says Bricker.

Located in the plaza across from Wilfrid Laurier University’s athletic complex, if Lana’s Lounge were a suburban home, it would be a backsplit (or maybe front-split): enter the venue, and you’re in the music lounge; climb a few stairs and you’re in the bar and dining room area.

March will mark the restaurant’s fourth anniversary. Bricker and Mansz describe the venue as a “full-service, full-spectrum” venue for dinner and live music, targeting a 35-plus age demographic.

However, during the pandemic, too tight a focus on the market sector means all bets are off.

“Obviously, the pivots for the industry have been massive,” says Bricker.

Bricker and Mansz tested and liked their beers, but another connection was just as important. “The community supports us, so we wanted to support the community,” Bricker says of their decision.

After sampling a range of Rural Roots beer and “tossing ideas back and forth” with brewery owner Roger Lichti, the pair had found a partner.

“We have similar approaches,” Mansz says of Rural Roots. “We are both concerned with the customer experience.”

They evaluated the flavours and body of Lichti’s Kolsch and Pilsner and decided on a recipe.

“We came up with a lager, a lighter beer at four per cent. It’s a very crisp-drinking beer that isn’t filling,” Bricker says. “It finishes nicely and goes well with our food.” 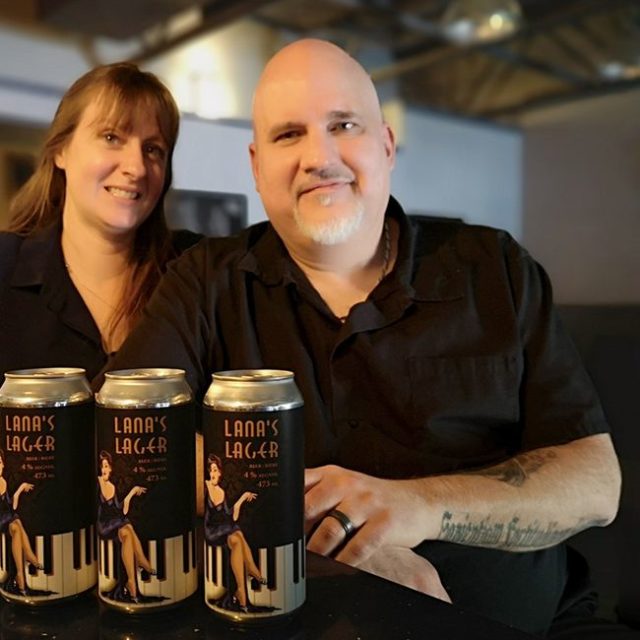 Lana’s Lounge isn’t unique in wanting a proprietary beer brand; several local restaurants have their own beers on the menu, including Crazy Canuck and Borealis Grille, and others.

Available in cans and on tap, Lana’s Lager was immediately well-received, selling out in a couple of weeks. “That’s roughly 640 cans and 300 litres of draft,” says Bricker, adding that Rural Roots is brewing more.

What does he say about the return on the investment?

“It’s been dramatic. It was a game-changer for us in just a few months because it’s passive income. It has been a supplement to what has been essentially government reliance during this time,” he says.

On the marketing side, the beer collaboration has expanded Lana’s customer base even during pandemic conditions for retail, Mansz says. “We’ve had several people just pop in for the beer when they heard about it. And they’ve never been here before.”

That, in turn, has created a small community of fans who enjoy the beer. It’s a new pandemic reality that during the various shutdowns, lovers of food and beverage have gone out of their way to support local: Lana’s Lager is just one example.

Pleased with the new beer’s success and performance in straitened pandemic circumstances, Bricker and Mansz plan to continue to promote it, but they won’t expand to another beer just yet. “I could see something seasonal in the future,” he says.

Assuming that past behaviour can predict its future counterpart, with dining rooms reopening this week, Lana’s Lager should move briskly.

Mansz has successfully sold the beer to receptive customers hungry for a dining-in experience, she says.

“Lana’s Lager has been easy to sell. It’s something new and unique for our guests.”

Our labels are designed and illustrated by Amanda Wall. We were able to pass on her services so that Lana’s Lounge could have their own look that matched their brand.